“Twinlode Automation took our company’s products from being stored on the ground to a high-density double-wide advanced racking system that increased productivity by more than 50 percent, improved our storage density by more than 35 percent, and reduced wear and tear throughout our warehouse operation.” 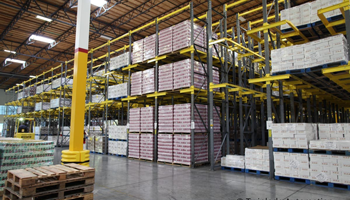 Since its founding 80 years ago, Nor-Cal Beverage Company based in Sacramento, Calif. has become one of the largest independent beverage co-packers west of the Mississippi, specializing in the bottling, co-packing and distribution of sodas, teas, AdeS, chilled juices, energy drinks and fortified and sparkling water for the largest beverage makers in the world, including Coca-Cola, Arizona Tea and more.

In addition to its production capabilities, global brands and the sales and marketing of its own Go Girl Energy Drink, Nor-Cal offers a team of experts who help customers from convenience stores to biotech labs to select, install and service their specialized equipment. From the very beginning in 1937, when Roy Deary and his four-person crew bottled their first case of Hires Root Beer, the firm was producing 25,000 cases each year. Today, more than 50 million cases of drinks are produced annually from the company’s production facilities in the Sacramento and Los Angeles areas.

As with any company enjoying long-term success, there are welcomed challenges that must be overcome to sustain momentum in the marketplace. One of those challenges involved overly crowded warehouses.

According to Deary’s granddaughter, Shannon Deary Bell, Nor-Cal Beverage president and CEO, “Twenty years ago we had three or four different warehouses that were very inefficient. We stacked pallets one or two high, sometimes three high depending on the product mix. We actually outgrew those warehouses very quickly because we didn’t have the racking capability.”

To help solve the problem common to many warehouse operations, her company teamed up with Twinlode Automation, a major material handling distributor that specializes in beverage storage design, installation and service globally.

“At the time,” Bell continued, “we were doing a huge project with Coca-Cola involving their boxed juices. The Twinlode Automation team quickly assessed the situation, made recommendations and gave us an honest cost estimate.”

Bell’s brother, Tim Deary, Nor-Cal’s executive vice president of warehousing and logistics, added: “We used to have single drive-through racks that were extremely tight for our forklifts and causing extensive and costly damage.”

The Twinlode Automation project management team quickly designed a system that allowed Nor-Cal to store its new “septic packs” without stacking them on top of each other. It also provided a way to handle two pallets at a time, both in and out of the racks with its Gen2 dual-pallet system. “This significantly increased our warehouse density and throughput,” said Tim Deary. “With Twinlode Automation’s Select Rack system, we are able to load a truck in 15 minutes versus the 45 minutes to an hour it once took. And, our damages have decreased 90 percent.”

“The Twinlode Automation team took our company’s products from being stored on the ground, to a high-density double-wide advanced racking system that increased productivity by more than 50 percent, improved our storage density by more than 35 percent, and reduced wear and tear throughout our warehouse operation,” said Bell.

Using the combination of Twinlode Automation engineering expertise and its advanced racking systems, Nor-Cal Beverage Company continues to enjoy maximum cubic square foot space utilization in all of its warehouse facilities while ensuring that its customers’ orders are fulfilled efficiently and on time. “Twinlode Automation always provides the necessary tools to let us get that job done,” said Bell.